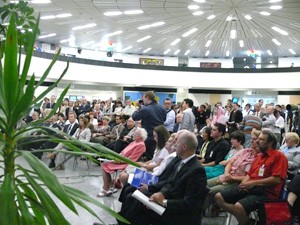 DR. KLAUS RENOLDNER,
CHAIRPERSON of the NGO – COMMITTEE – ON – PEACE at UN ,

WHY WE NEED A NUCLEAR WEAPONS CONVENTION

Your Excellencies, distinguished ladies and gentlemen!

Commemorating the victims of and implicates our obligation to struggle for abolition of all weapons of mass destruction. And that’s the reason why we started a petition to establish GENBAKU NOHI day on August 8th.

We know about the destructive effects of nuclear weapons, and as a physician I can certify that there is no treatment. There is only prevention, and prevention in this case means abolition of these weapons.

We all know that nuclear weapons are immoral. They are incompatible with human rights, very dangerous and expensive.

Their existence is of no help for anybody, they just destroy or threaten to destroy, endanger peace and create an atmosphere of fear. They are weapons of mass murder and genocide.

They can not be used to prevent from terrorism, but terrorists might acquire and use them, as long as these weapons exist.

Shortly after 1945 important scientists, physicians and humanist have spoken out for a prohibition of nuclear weapons. Among them Linus Pauling, Albert Schweitzer and Albert Einstein, all three Nobel Peace Prize Laureates. In 1961 - I was a schoolboy - these activists of civil society could celebrate a first success when UN established the first Nuclear Test Ban Treaty: the prohibition of atmospheric tests.

In 1980 cardiologists Bernard Lown and Jevgenij Chasow founded the IPPNW. It was the era of cold war. With important publications IPPNW demonstrated the medical effects of nuclear weapons and of nuclear war, and sent regular physicians’ delegations to governments and parliaments of nuclear weapon states. This work – it was a bridge of peace between east and west, built by physicians - also has been awarded with a Nobel Peace Prize in 1985.

The Advisory Opinion of the International Court of Justice in 1996 was at least a partial success after four years of struggle of our NGOs.

During eight years, from 1988 to 1996, IPPNW had a strong campaign of protesting after each performance of nuclear tests. It was already the age of telefaxes and we were hundreds of physicians in many countries who received a fax with some data immediately after every nuclear test explosion in order to start sending medical prescriptions “Stop Nuclear Testing” like this one here (showing a recipe) to every respective Embassy. Finally, it was not in vain. With pleasure years later I received the invitation to the opening of CTBTO in . And we are proud that Ambassador Toth, head of CTBTO is among us today.

It was NGOs, the representatives of civil society who campaigned against slavery in the 19th century. NGOs protested and organized against wars, humanitarian mines and cluster munitions, illegal arms’ traffic and other violations of human rights. And it was NGOs who  struggled for the establishment of human rights. The Charta of Human Rights is as old as the atomic bomb.

But for nuclear weapons at the age of 65 it is high time to retire.

What we need now, is a Nuclear Weapons Convention.

The Model Nuclear Weapons Convention (showing the book), elaborated by IPPNW, IALANA and INESAP is a draft framework for controlled abolition including guidelines for verification. It has been presented at the NPT Review Conference.

We know from opinion polls that large majorities of civil society in west and east in north and south want a prohibition of all weapons of mass destruction. Now is the chance for a breakthrough:

After president Obama speaking out for a world free of nuclear weapons and the participations of US-American, British, and French delegates at this year’s celebration in .

And the clear words of UN Secretary General Ban Ki-Moon: WMD: We must disarm. Do you remember his Video Message here last year?

Now we have the chance to become the necessary critical mass, in a positive sense.

Having in mind the future of our children shall keep us active and full of energy to continue this campaign in good cooperation with UN organizations and the many governments of like-minded states.

Thank you for your attention.