For a World without Weapons of Mass Destruction 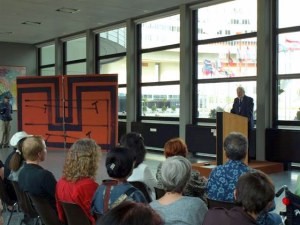 Talking to you today as a physician has a special reason.
We physicians know that in case of nuclear explosions there is no medical help. Everything is destroyed, no emergency services, no operating facilities in the area.
My organization, the IPPNW (International Physicians for the Prevention of Nuclear War), founded in 1980 by Prof. Bernard Lown from Harvard University and Prof. Ewgenij Chasow from the Moscow Academy of Sciences – both Cardiologists - has published a series of scenario-studies on the health effects of nuclear explosions and of nuclear war.
These publications and our warnings were the reason why IPPNW received the Nobel Peace Prize in 1985.
We clearly demonstrated and expressed that there is only one way to cope with Nuclear Weapons: abolition. Where there is no treatment, prevention is needed. And prevention in this case can only mean abolition of weapons of mass destruction, under UN-control.
There is an urgent need for a ban of all nuclear weapons. As my famous colleague Prof. Lown used to express it, we must understand that human beings and nuclear weapons will not coexist over a longer period of time. Either we succeed in abolishing nuclear weapons or nuclear weapons will destroy mankind.

We must not tolerate the fact that the NW – states have not fulfilled their duty of abolition
* in spite of the fact that according to art. VI of the NPT they are obliged to do so,

*in spite of the Advisory Opinion of the International Court of Justice in The Hague, which condemns threat and the use of NWs

*in spite of the report of the WMD-Commission of 2006, led by Hans Blix, which clearly says that NWs are weapons of terror,

If one Hiroshima-bomb (20kt) killed more than 100.000 people at once, how many persons could be killed by bombs of megatons?
And there are some 10.000 bombs existing.

What kind of catastrophe or other event needs to happen to let mankind awake from its lethargy?

From taking part in international physicians’ delegations to politicians and military experts in many places of the world I know their arguments.
It is argued that we need these weapons for our security.
It is argued that there is a growing danger from terrorism.
Do you really think that NWs are a means to protect us from terrorism? That a terrorist can be deterred by NWs?
Unfortunately the opposite is true. And additionally we must fear that the longer NWs exist, the bigger the danger that they might get in the hands of terrorists.

Therefore we urgently need a “Nuclear Weapons Convention” like the Model NW-Convention, which has existed since 1997 and was presented by our NGO representatives to the UN in NY and last year at NPT Preparatory Commission here in Vienna.

Let us use every chance to promote the idea of a definite abolition of all WMD. In recent years we are experiencing a period of new armament neglecting real needs of a mankind. We are facing poverty, injustice and a growing ecological catastrophe, as clearly pointed out by the UNDP in its recent “ Human Development Report 2007/2008”. We should invest all our creativity to cope with these existing problems instead of using energy and investment for more weapons and armament.

We are members of civil society and there are so many positive examples for peaceful development and disarmament. As there are also in the field of NWs:
The abolition of medium distance NWs,
the Comprehensive Test Ban Treaty,
and the Nuclear Weapon Free Zones of Latin America, Africa, South East Asia and Oceania, Central Asia and Mongolia.
And we know from opinion polls in many countries, east, west, north and south that large majorities of 80 to over 90% of populations are against NWs.
It is our task to insist that this is realised.

I do not want that one day our children and grandchildren, if they survive a nuclear or ecological catastrophe, accuse us saying: You all knew about this threat of terror and of destruction. Why didn’t you act against it?
Therefore commemorating the victims of Hiroshima and Nagasaki is also an appeal to all of us, wherever we stand in our lives and in our professions, to struggle for peace, disarmament and for a ban of all weapons of mass destruction.

Thank you for your attention

with Ms. Yuko Gulda and artists